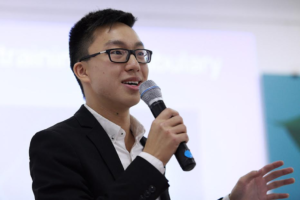 Where are you from? Which languages did you grow up with?

My name and face make it hard to guess don’t they? I’m an Indonesian-American who was born in Portland, Oregon but raised in New York City. Growing up as an immigrant I was constantly surrounded by people who are different from me. My parents speak Indonesian at home and although I resisted speaking it until I was 13, I finally gave-in. I realized that Indonesia and Indonesian were cooler than I wanted to believe.
My father is from Jakarta and very multilingual. If he wanted to share secrets he would switch to Sundanese with my mother. He also spoke the local Jakartan dialect of Indonesian as well as a creole called Manado Malay he learned by radio as a teenager. From the radio! Imagine that. To add to the mix, my grandparents and relatives speak Javanese. Growing up in NYC I also was surrounded by Spanish speakers and a plethora of other cultures and languages.

When did you discover language learning?

As you can imagine, originally from my Dad. He showed me how cool it was to connect with people across cultures. In truth it really started with a boring car ride. My sister and I couldn’t understand any of the jokes in the car being made by adults and I was very upset. Two hours is a long ride for a kid! I told myself that I would learn Indonesian because I no longer wanted to be left out.
Skipping to high school, I finally learned a language I had no familiarity with. It was completely foreign. This is when you can say I truly discovered language learning.

How many languages do you speak?

I speak English, Indonesian, French, Spanish, and German from best to worse in that order. But let’s be honest here, it’s not as easy as you think. In fact, within the span of a year, I tried learning 3 different languages, and I failed in each of them.
The most important thing is knowing your why. Knowing what motivates you and is the reason for learning in the first place will keep you grounded till the end.

How did you learn them? What tips do you have?

The story for every language is a little bit different. But here’s the common thread: having a friend makes all the difference. The thing that drives me most in life is people. I just love people! Having people I cared about made me not abandon my cause. The other common thread is immersion. As the child of immigrants travel was never really an option. So rather than giving up on language learning, I changed my environment to suite me instead.
When learning French, I thought I would never go to Paris. So I turned my bedroom, iPod, and computer into France. I watched French movies and listened to French songs everyday to and from school. I also spent a lot of time reading. Having a dear friend or two that spoke it gave me hope as well. But again what’s most important is your why. Maybe for you it’s a job, a loved one, the culture. Keep reminding yourself about it. Have it in focus. If you have your purpose it’s hard to lose sight of your goals.

Which language was the most difficult/easiest to learn and why?

I’m going to be straight with you. This really depends on how many languages you already know, and what your native language is. Every language has it’s challenges. For myself the hardest language to learn was French. Why? Not because it’s actually difficult, but because it was the first foreign language I had ever learned. The sensation of your brain expanding in order to learn another language is weird. It takes time and once you’ve got that down, it gets easier. When your brain understands the mechanics it’s good.
Indonesian for me is difficult and still is because even though it’s my heritage language, it has something called diglossia. This means it is actually two different languages that are used depending on the situation. The vocabulary you need to speak it is never ending because new words are being invented each time you go to the bathroom.
Spanish was the easiest language for me personally because my basis in French paved the way. I also had patient friends who were willing to put up with my skills in the meanwhile.

What language would you like to learn one day?

There are so many! I definitely want to learn Sundanese and Javanese which my relatives speak because it would help me connect with them more as well as when I go back to Indonesia. I’d like to actually learn Dutch, Portuguese and Italian, which I failed at. I know that if I work hard enough I can actually claim them. But for something completely different, I’ve been thinking about Farsi or Arabic. The script fascinates me. Japanese culture is hard to resist (as is the script.) But Norwegian sounds really cool to me, maybe because I just like the country so much?

What makes EXPOLINGUA special for you?

EXPOLINGUA is amazing because you have thousands of people gathering and seeing all the wonderful programs this world has to offer. The opportunities to work and travel abroad aren’t dwindling and we need to take advantage of it. We need to stop dreaming and act on our dreams. Explore the beauty of our planet and help make it a better place.