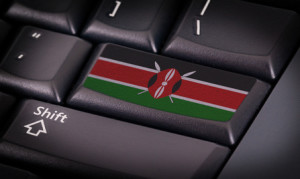 Imagine coming home from a long vacation and finding out that the language you used to speak has evolved into something unrecognisable. Your father insists on being addressed as mdosi and your girlfriend will only respond to mshakaji. Oh and forget about buying cigarettes – since you’ve been gone, a rapper has popularised a new word for those, too.

This is what actually happens to Sheng speakers in Kenya. In this ever-evolving language, words are constantly being refreshed, revised and restructured according to current trends.

“Whatever Sheng you are speaking now, the words you’re saying now, when you go like even for three months and you come back, they’re done,” says Octopizzo, a rapper based in Nairobi.

There are 42 languages spoken in Kenya but Sheng is poised to eclipse them all as the language of the country’s urban youth. The Swahili-based cant, which originated in the slums of Nairobi, is composed of a mix of Kiswahili, English and Kenyan tribal tongues with words from Arabic, Hindu, French, German, Spanish and Italian also thrown into the mix.

While Sheng today is used in commercials and political ads, it began as a secret slang largely used by gangs in the poorest areas of Nairobi in the 1980’s and 1990’s.

“When you had all these young people living together in these very crowded areas of Nairobi, [they needed] a language of secrecy,” says Professor Mungai Mutonya, senior lecturer in socio-linguistics at Washington University in St. Louis, “where they could be able to communicate without getting the information out to their parents.”

According to Kelvin Jecton Okoth, creator of Go Sheng Services and upcoming speaker at eLearning Africa 2015, Sheng signifies “the negotiations and struggles of Kenya’s youth.”

“The voice of family comes to [youth] in ethnic languages that embody tradition and heritage. The voice of education asks them to place Swahili at the centre of their multicultural identity, but does so in English.” Sheng, on the other hand, gives young people the opportunity to “question and challenge the ideologies and identities that attempt to define them.”

When he saw that there was no home for Sheng online, Okoth created the website sheng.co.ke, which has become the definitive website for Sheng speakers. There, visitors can find an extensive dictionary containing definitions for 3,900 words, a lively forum, lyrics translations and crossword puzzles.

The goal of the project is to demystify, document, archive and organically grow Sheng language and culture.

“Each person feels represented and has a sense of ownership in Sheng, given the fact that the language is continually evolving,” says Okoth.

“The Sheng language and culture, to date, remains the only initiative that has incorporated the very best of the diverse languages and cultures of the tribes of Kenya.”