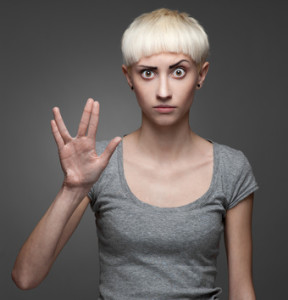 That’s the sophisticated language used by giant-brained aliens in the film “Mars Attacks,” and the only fictional language I’ve ever memorised by heart (and used to yell at people).

But it’s mere baby babble compared to the stunning variety of constructed languages (or ‘conlangs’ for short) that have been developed over the years. According to the website Langmaker, there are more than 1,000 language inventors and 1,902 made-up languages, from Ayvarith to Zyem.

Linguists use these constructed languages to “dissect how real language works,” according to Amber Dance, a writer for the Los Angeles Times.

“Once the private arena of J.R.R. Tolkien, Esperanto speakers and grunting Klingon fanatics, invented languages have flourished on the Internet and begun creeping into the public domain,” she writes.

Klingon, the language used by an alien race in Star Trek, remains the most popular of all of Hollywood’s invented languages, according to the Guinness Book of World Records. Other contenders include Elvish (Lord of the Rings), Alienese (Futurama), Lapine (Watership Down) and Na’vi (Avatar).

Marc Okrand developed the language of Klingon while working as a screenwriter for Stark Trek. He’s also a linguist, whose dissertation charted the grammar of a now-extinct Native American language.

Most constructed languages follow the basic tenants of natural languages — containing the ‘ah’ sound, for example — but Okrand purposefully broke these rules, choosing the rarest form of sentence construction: the object-verb-subject form. “I boarded the Enterprise” would, in Klingon, be expressed as “The Enterprise boarded I.”

The resulting language is culturally baffling. “[Okrand] ended up with something that sounds like an ungodly combination of Hindi, Arabic, Tlingit, and Yiddish and works like a mix of Japanese, Turkish, and Mohawk,” says Arika Okrent, a writer for Slate.

Klingon’s vocabulary, heavily centred on Star Trek concepts like space crafts and warfare, can make it unwieldy for day-to-day use (a car must be ‘docked’ – not parked –for example). But that hasn’t stopped Klingon devotees from using it to conduct marriage ceremonies, write songs, translate Shakespeare’s Hamlet and even create Klingon translations of the Bible.

All of which begs the question: why? Why memorise “36 verb suffixes and 26 noun suffixes” that have no practical value, other than to communicate with fellow fans?

“Klingon isn’t about practicality, or status, or even about love for the original Star Trek series,” according to Okrent. “It’s about language for language’s sake, and the joy of doing something that’s not easy, without regard for worldly recognition.”

In other words, mastering the art of Klingon is its own reward. It allows the speaker to immerse oneself in a fictional universe that’s full of parallels to our own.

After all, language isn’t just a system for assigning meaning; it’s also a feeling. Constructed languages can even have a therapeutic effect on their speaker.

So, at the next wedding you attend; why not give a toast in Klingon?