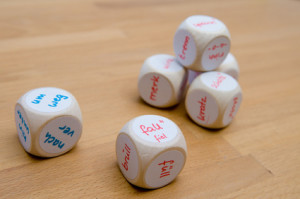 Unless you’re a rap artist or poet, chances are you don’t pay much attention to the “invisible pulses” that form the foundation of your sentences.

But the truth is that our speech is made up not so much of words as sounds, grouped together acoustically by syllables.

Although syllables are vital to the construction of sentences, there’s still a lot of debate about how to count them. Last month in the Guardian, author Josephine Livingstone canvassed an array of linguistic debates about the identification of the syllable’s elusive beat.

“They feel obvious, but people differ quite widely in their intuitive definition of what they actually are,” Livingstone writes. “You and I and Shakespeare know that verse metre is based on syllable counts, so we’ve certainly come up with reliable rules for controlling big groups of them. Word by word, however, we haven’t.”

Syllables roughly correspond to the opening and closing of one’s jaw (though exceptions abound, including the word “haha”). However, an unstressed syllable often has no “peak of intensity,” confusing how linguists measure them.

For example, some experts think the word “predatory” has three syllables, while others count four. Likewise, in a word like “communism,” is the final “m” syllabic? What about words with what linguists call high front vowels followed by /l/ (meal, seal, real)? Are they two syllables or one?

You may be wondering, why does this matter? Who cares if we can agree how to count the beats in our speech?

While it may seem pedantic to attempt a precise count of beats per phrase, some experts see it as crucial step to learning a new language. Certain language schools even believe that non-native speakers must hear syllables before they’re able to imagine new words.

But humans don’t just learn new languages using syllables; we think in them as well.

Have you ever said one word when you meant a different one entirely? Chances are the unintended word (called a malapropism by linguists) you uttered had the same number of syllables as the word you were intending to say.

Researchers have also found that subjects who perceived a word as being “on the tip of their tongue,” were able to guess the correct number of syllables in the target word at a level “significantly above chance” (57% correct).

All of this suggests that the humble syllable, hiding in a far corner of our consciousness, is as elusive as it is vital to our understanding of language. While scholars continue to debate how to measure its beats, and artists utilize them to give their works a richer texture and flow, it’s worth identifying them in our speech to better understand how and why we communicate the way we do.