From Caracas to Koblenz: “There’s always a way and a how” 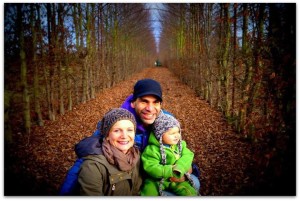 Alejandro Carrizo is 40-years-old. He was born in Caracas, Venezuela, and was raised both in Irvine-California, USA – until he was five years of age – and Caracas. Alejandro is a physical therapist and through competitive swimming had the opportunity to visit many countries in Central and South America. But this was just the first step: until now he has lived in Venezuela, the USA, the Netherlands, Spain and Germany where he is currently living. This time we are not interviewing somebody who studied in a Spanish speaking country, but the other way round, a native Spanish speaker now living in Germany. Ale, who also has a German wife and a daughter, has shared with us his thoughts on interculturality and experiences living abroad.

What were the reasons for leaving your ‘home country’?

The first reason was the lack of job opportunities in my home country combined with a very unstable economic-political situation.  After the ‘first unsuccessful’ migration to the USA, I found myself back in Venezuela.

After falling in love with my wife Hannah, who visited Venezuela for quite a time, I decided to migrate again to be closer to her. Only this time I was headed to Europe… First I moved to Maastricht for a few months, where Hannah finished her bachelor thesis. After that I came to Barcelona for a few months as well, until finally we established ourselves in Valencia-Spain for the next six years.  In the summer of 2010, Spain was reaching a breach of economic crisis and we then decided to move to Koblenz-Germany, which is my wife’s hometown and where I have lived up to this date.

Between Venezuela and the USA, most importantly the job opportunities were higher in the States as back home in Caracas. Also one feels safer in the States.  But then again the food is better and healthier in Venezuela.

Between USA and Spain: In Spain there’s almost the same sense of security or safeness for going out, also back then jobs were easy to find in Spain as well. Besides that one has more freedom as far as dress code is concerned (not so much ‘branding’ like in the States, although rapidly increasing). The food is way better in Spain and people are more open to new and different cultures. These characteristics are similar to Central and South America.

Between Spain and Germany: in sense of security Germany is the safest country I lived in so far. Germans are much disciplined, open minded and respectful to one another. Even if you wear a monkey suit and that’s your thing nobody would be rude!

Is it important for you to travel? What would you recommend to other people?

It’s very important for me to travel because I think we can always learn a new or different way to live.  In some countries where there is not so much economic-political stability, one can learn how to enjoy life without ‘so much’.  There is always a way and a how… and it varies from one country to another. My one recommendation is to understand and practice the respect and good manners we should have for each other. If you consider that one won’t have many problems adapting to foreign countries. Try to learn as much as you can as long as you can. Adapt to and participate in the society you live in but don’t forget where you’re coming from!

Has your experience abroad influenced your career; if so, how?

In my case it has taken me around 15 years to be able to work again in my field. On the other hand it has opened paths to new experiences and fields. It made and still makes me more open to people in general.

How did you organise your different stages of life?  Did you have any help from the official side?

As far as organisation very little and only through my last migration (Germany) I have had the support of regional and federal institutions. There are rules for everything! At the beginning this was kind of frustrating but then again this was an important thing to learn and helped me to understand the German culture even better.

What have been the highlights of your experience abroad so far?

As the first question highlights it is the network of friends I have been able to build in all countries I have resided in. This highlight comes hand in hand with the learning and exchanging process.

Did you have a major breakthrough for decoding anything concerning new cultures (e.g., languages)?

Only for my last migration process did language play a very big role… As far as decoding new cultures, I believe we should stay true to ourselves and not pretend to be someone you are not… authenticity could be the key here. The transition into the German culture, for example, was pretty hard but I have had a lot of help from my wife who could explain several things that were uncommon from my point of view.

Have you ever thought of going back? Do you miss anything special?

I always think about going back, unfortunately the economic-political situation has only worsened in recent years. So right now it isn’t an option. But then again I miss many things from my home country like family, friends, foods, but I think above all I miss ‘our sense of humour’.

Three words that pop into your mind when you’re thinking about your new home?