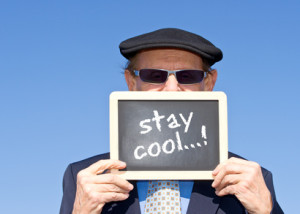 As we get older, simple skills such as making a cup of tea or reading a book – our cognitive abilities – start to deteriorate. For some people this happens more rapidly and severely than others and can lead to dementia; a condition that affects around 36 million people worldwide.

A common way to increase mental stimulation is completing crosswords and quizzes, but what about learning a language? Don’t use being too old as an excuse because a new study has found that learning a second language, even as an adult, can have a positive effect on the brain and delay the onset of cognitive ageing.

A previous study already suggested that bilingualism delays the onset of dementia, but a new study by Annals of Neurology has taken the investigation further asking whether people improve their cognitive functions through learning new languages or whether those with better baseline cognitive functions are more likely to become bilingual.

“Our study is the first to examine whether learning a second language impacts cognitive performance later in life while controlling for childhood intelligence,” says lead author Dr. Thomas Bak from the Centre for Cognitive Aging and Cognitive Epidemiology at the University of Edinburgh.

The researchers studied 853 participants; first testing them in 1947 (at age11), and retesting them in 2008–2010 when they were in their 70s. All were in similar social situations when the initial intelligence test was conducted – they were all English native speakers, of European origin, born, raised and living in and around Edinburgh.

The study found that in old age “bilinguals performed significantly better than predicted from their baseline cognitive abilities, with strongest effects on general intelligence and reading.”

All participants could communicate in at least one other language apart from English; 195 learned the second language before the age of 18 and 65 learned it later in life. In both instances the positive results were evident.

“These findings are of considerable practical relevance. Millions of people around the world acquire their second language later in life. Our study shows that bilingualism, even when acquired in adulthood, may benefit the aging brain,” says Dr. Bak.

The World Health Organization predicts that the number of people living with dementia worldwide will double by 2030 and more than triple by 2050. Studies such as this are therefore crucial in helping to understand how to effectively treat and prevent the illness.

After reviewing the study, Dr. Alvaro Pascual-Leone, an Associate Editor for Annals of Neurology and Professor of Medicine at Harvard Medical School in Boston, Massachusetts, said, “The epidemiological study by Dr. Bak and colleagues provides an important first step in understanding the impact of learning a second language and the aging brain. This research paves the way for future causal studies of bilingualism and cognitive decline prevention.”

Previous:Facebook-Seite der DG Translation
Next: From Caracas to Koblenz: “There’s always a way and a how”