The International Committee of the Red Cross at EXPOLINGUA Berlin 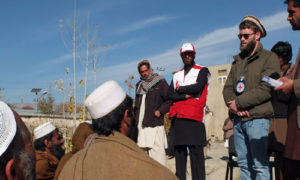 Here at the International Committee of the Red Cross, we’re really excited to be attending the EXPOLINGUA Fair in Berlin for the first time next week. Languages are crucial to the work of the ICRC; we have people from over 40 professions working for us and all of them the need to speak at least one other language as well as to English, whether they’re a programme officer, a doctor, a logistician or a finance manager. After all, how can we assist and protect people affected by armed conflict unless we can communicate with them?

The working languages of the organization are English and French, with Arabic, Russian and Spanish increasingly under demand. We also use interpreters for Asian and African languages, such as Hausa, Amharic, Somali, Swahili, Kinyarwanda, Arabic, Urdu, Farsi, Pashto, Tamil, Sinhalese, Bengali, Thai, and Khmer. As an interpreter, you don’t usually need French – just the source language and English. However, we look for people who have studied these languages, but don’t originate from the countries where they are spoken. If you want to understand why, you’ll have to come to my presentation on Friday, November 18 from 14:30 – 15:15 in room 511 at EXPOLINGUA Berlin. I’ll be going into detail about the work of the ICRC in general and that of interpreters in particular, as well as talking about my own experiences as an interpreter in Kashmir and Afghanistan. I look forward to seeing you there!