The online revival of African languages 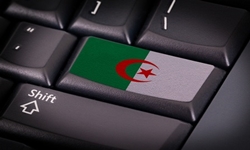 On January 5th, 2016, the Algerian government published a new draft constitution. Among provisions to strengthen the democratic process in the country is a move to give the Berber language (Tamazight or Amazigh) official recognition.

This would put Berber, which was introduced as a national language in some schools in 2002, on par with Arabic. Paralleling a similar decision in Morocco in 2011, this can be seen as a considerable victory for the 25% of the Algerian population who speak Berber languages. It is also an achievement in which the Internet has played a large role.

The move, if signed into law, will reflect the progress made by Berber populations in North Africa to have their mother tongue recognised. The post-colonial era saw several North African states throw off European languages and embrace the Arabic language and identity, which resulted in the marginalisation or oppression of many other linguistic and cultural groups.

The advent of the Internet in the 1990s gave Berber populations the ability to link with others across national borders and the resources to promote and teach their languages. Sites such as Amazigh-Net were set up to provide a space to discuss Berber issues. The ancient Berber script, Tifinagh, used in Moroccan schools since 2003, has also been aided by an online revival.

The online presence of African languages has increased in recent years. Google translate, for example, added Somali, Zulu, Igbo, Yoruba, and Hausa in 2013; Chichewa, Malagasy, and Sesotho were included in 2014. As in the case of Berber, it is clear that the online presence of a language can be an important aid to education and the recognition of its community.

There are, however, certain obstacles to be overcome when bringing a language into online use. First, of course, its speakers must have access to a computer or smartphone. Then they require a keyboard to input an orthographic system their readers can understand. In regard to the latter, multiple difficulties arise.

From the Internet’s inception as a global entity, it has favoured “international” languages and Latin letters. Although most devices today support the Arabic script, many Arabic speakers communicate online using a variety of an “Arabic chat alphabet“, a system of writing Arabic on a Latin keyboard that uses diverse letters, ligatures, or numerals to represent Arabic sounds and letters that don’t have an unambiguous one-to-one correspondence in the Latin alphabet.

Criticised by some as a detrimental form of Westernisation, this innovation is historically an interesting reversal of the process by which the Ancient Greeks created the first European alphabet – by taking a Semitic (Phoenician) script and using its extra letters to represent vowels.

The choice of a script is fraught with political and practical considerations. Generally speaking, a writing system specifically conceived for a particular language or dialect will have the best chance of representing it accurately because it tends to be a product of its speakers’ cultural unity – as the Tifinagh script does in Morocco today. Using such a system, however, can also cut its community off from the world: although employing the Latin alphabet may indeed have unpleasant connotations of colonialism, the contention it facilitates international communication arguably bears some validity.

Many of the languages of Sub-Saharan Africa have already been transliterated into Latin letters as the result of efforts of missionaries and Western colonists to establish standardised versions. Some of these endeavours have caught on, especially in the widely printed and distributed languages, according to Dr. Helma Pasch of Cologne University. Others, however, are considerably less well accepted.

“As I observed in several schools around Pretoria, South Africa”, she writes, “many pupils say learning their mother tongue, i.e. instruction in and of the ‘new’ official languages, is their most difficult task. The pupils’ difficulties arise from unfamiliarity with the standard versions of these languages because the ‘standard version’ is often derived from a rural dialect that existed about a century ago. In fact, it may be quite unlike the varieties currently spoken in the urban areas.”

At the same time, the linguistic codes known as “Sheng” and “Engsh”, primarily used in Kenyan and Tanzanian cities, have gained substantial popularity in online forums, where, says Pasch, the lack of standardisation “is not felt”. The impulse to codify a language, creating a standard means of communication, must be balanced by acceptance of its natural evolution.

There are now several initiatives encouraging the further development of orthographic systems for African languages and their use online, such as the African Language Materials Archive and Bisharat, an initiative promoting rural empowerment and indigenous knowledge through the use of maternal languages.

As the Bisharat website points out, the use of the most familiar language in ICT “… is such an obvious choice it barely gets noticed in the case of community radio or telephones”. International communication may well be dominated by international tongues, but as the case of Berber shows, the Internet can offer powerful support to the speakers of any language.