Faced with a moral dilemma? Use language wisely 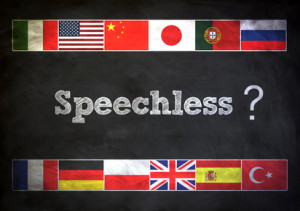 Oh, that awkward moment when you try to make a joke in a foreign language only for it to lose all sarcasm and ‘punny’ (funny pun, in case that one got lost, too) context. We all know that humour is commonly lost in translation, but what about moral judgement? According to a recent study, using a foreign language can alter the way we make decisions when faced with a moral dilemma. Should you sacrifice one man to save five? Nein, oui, no, evet… it depends which language you’re speaking.

The research carried out by the Public Library of Science (PLOS) focused on two main processes when asking participants to search for the ‘right’ answer: utilitarian ethics, which advocates saving as many as possible, even if it requires personally harming an individual – is it permissible to harm one to save many? A ‘yes’ would be considered a utilitarian decision. Then the intuitive, more emotional processes which generally support judgments that favour the essential rights of a person such as the right to live.

An experiment that included participants from Korea, Spain, the United States, France and Israel used the following example: You’re standing on a footbridge and a small on-coming train is about to kill five people and the only way to stop it is to push a heavy man off the footbridge in front of the train. This will kill him, but save the five people. Across all nationalities, most participants made the utilitarian choice when using a foreign language; that is, to save five by killing one. PLOS stated in their findings that the rate of utilitarian decisions in a foreign language was increased by more than half compared to the native tongue.

A similar, yet less emotional, experiment was also used to test whether results may have been due to a response pattern rather than the language used. Again, the results replicated that of the first experiment – more utilitarian decisions were made when speaking a foreign language. While only 18% of the participants decided to push the man to his death – in order to save five others – when using their native tongue, 44% chose to push him when using a foreign language.

So, why is this so? The PLOS researchers claim that the most likely reason is that a foreign language reduces emotional reactions and therefore prompts utilitarian judgments. It was also found that the more proficient one was in the language the more emotionally grounded that person became and, in return, less likely to give a utilitarian response.

“It shouldn’t matter if you are considering the life of ‘the large man’ or of ‘el hombre grande’. But it does matter,” PLOS states in its conclusions.

“Given that what we have discovered is surprising and unintuitive, increasing awareness of the impact of using a foreign language may help us check our decision-making context and make choices that are based on the things that should really matter.”