Language of the month: English 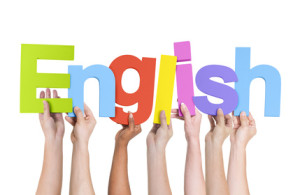 English, the third most widely spoken language in the world, is originally a West Germanic language, with many cultural influences contributing to what it is today. From the French introducing ‘upper class’ words, to William Shakespeare inventing around 2.000 new words and phrases on his own – ‘eyeball’, ‘gossip’ and ‘breaking the ice’, for example – today English continues to grow at a rate of about one new word every two hours.

Although English comes after Chinese Mandarin and Hindi in regard to native speakers, English is the most commonly used language on the Internet, and is often referred to as a ‘world language’. It is estimated that there are around 375 million native English speakers, coming mainly from the United Kingdom, the United States, Canada, Australia, Ireland, New Zealand and a number of Caribbean nations. In addition, one billion people worldwide are learning English as a second or foreign language. English has therefore been adopted as the official language of the United Nations, the European Commission and many other world organisations.

When English became a common language in print – from 1500-1800 – the dialect of London, where most publishing houses were based, became the standard. However, for centuries regional dialects of English have continued to spread.  These days, the major native dialects of English are often divided by linguists into the three general categories of the British Isles dialects, those of North America and those of Australasia. Looking at the United Kingdom more specifically, Received Pronunciation is considered one of the most popular and recognisable dialects. The “Concise Oxford English Dictionary”  describes Received Pronunciation as: “The standard form of British English pronunciation, based on educated speech in southern England, widely accepted as a standard elsewhere.” Other dialects of the UK include London’s Cockney, Scouse (Liverpool) and Scottish English.

The English language continues to evolve in regard to dialects, with new variations developing in countries where English has been adopted as a second language. Thousands of new words are also being created every year. Charlotte Brewer, Professor of English Language and Literature at Hertford College, a constituent college of the University of Oxford in England, says, “New words and phrases are entering the language all the time and it’s hard for dictionaries – even online ones – to keep up with them.”

Professor Brewer, who has published several books on the history of the English language, particularly focusing on the Oxford English Dictionary (OED) says that any dictionary worth its salt will research a word and check out all its possible senses before adding it to its word-stock – a task which takes time and expertise. “Of the 900 new words and phrases added to the OED in its most recent quarterly update, March 2014, many have been around in the language a long time but their inclusion has had to wait till they could be fitted into the dictionary’s revision programme. Among the new entries are ‘bestie’, recorded from 1991; ‘bookaholic’, 1965; and ‘beat boxer’, 1985,” she says.

In 2013, the Global Language Monitor’s 14th Annual Survey of Global English revealed that ‘fail’, ‘hashtag’, ‘surveillance’ and ‘drones’ were among the most popular words of the year; meanwhile, ‘federal deficit’ and ‘global warming’ were ranked as top phrases. Results excluded articles such as ‘the’, and were collected by monitoring word usage on the Internet, including social media platforms, the blogosphere, and 275,000 print and electronic global media publications across five continents.