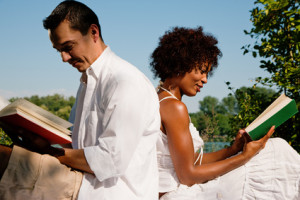 As an international meeting point for e-learning business, ONLINE EDUCA BERLIN 2013 offered numerous sessions for experts and other visitors involved in the educational sector. One highlight was the session “New Methods and Tools for Intercultural Learning”, hosted by chairperson Maren Deepwell (Association for Learning Technology, UK). Three speakers provided an overview of their specific experiences in intercultural e-learning practice and showed how practical applications can engage and motivate learners in a global world.

First, textile craft and ICT teacher Helka Mäki (née Lehti) from Kulkuri School of Distance Education, Finland, spoke to an audience of 40 viewers about “E-Learning by Gamification”. In autumn 2012, Helka Mäki started teaching an 80-hour textile craft online course over one year for 13-year old Finnish pupils living in various countries around the world, from China to Uruguay. It is a challenge for the teacher to arrange suitable appointments for common online lessons. Overall the Kulkuri School of Distance Education is teaching pupils from 7 to 16 years.

“Therefore, it is important to create a narrative, joyful and motivating learning environment and to use innovative teaching methods,” says Helka Mäki. As learning by games is a proven method to engage pupils, gamification plays an important role for the learning process. Mäki follows twelve key principles for game-based learning environments (An & Bonk, 2009), including problem-driven activities in a meaningful and situated context, exploration, social interaction, pauses to reflect, learning through doing, through failure and through a character role.

As an example of motivating gamification in the textile craft online course, Mäki reports on a message from space for the learners. “The pupils got the message that they are chosen to represent the Earth in the Intergalactic Beanie Meeting.” The pupil had to compose, design, prepare and assess a craft artefact (“beanie”) using typical and representative motifs representing the earth to show it to the aliens. The results were beautiful beanies and positive feedback by motivated pupils.

Subsequently, Kurt Kohn (director of the Steinbeis Transfer Center Language Learning Media, Germany, and professor emeritus of Applied English Linguistics at the University of Tübingen) spoke about “Intercultural Communicative Practice 2.0”. He stressed the language learning potential of web 2.0 and its options to generate interaction and communication as goal of language learning. Kohn named fora, wikis, blogs, video conferences and second-life environments as useful tools to provide opportunities for communication. Intercultural communication and language learning can go hand in hand, as learners from different countries can participate in the same learning environment.

Kohn gave an example of the EU project TILA (Telecollaboration for Intercultural Language Acquisition) in secondary school language teacher education. Twelve institutions from six European countries take part in TILA from January 2013 till June 2015. In TILA, Steinbeis conducts case studies of discussions in English as a lingua franca (ELF discussions), developed for non-native-speaking 13- to 16-year-old pupils in two web environments: the 3D virtual world “OpenSim” and the videoconferencing platform “BigBlueButton”. Three to five learners from different countries and cultures take part in ELF discussions. In “OpenSim”, each of them is represented by one avatar in a second life environment. Authentic intercultural communication takes place when participants meet here and start a spontaneous talk. Previous topics in the context of TILA were facebook, veggie day, sports, music and daily life at school.

Final speaker Jonathan Lipschitz (Madrid) made his presentation about “Entering a New Era with Reflex Training”. The linguist and teacher has been teaching EFL to young learners for 14 years across the world. Lipschitz underlined the importance of using language in real live communication. By reflex training, beginners train language efficiently before using it. Following a theory of language reflexes, “the existence of these reflexes is a precondition for our ability to process and comprehend language,” says Lipschitz. They need to be created, developed and refined during the process of acquiring a language. “Using innovative techniques and the right tool, we have discovered ways to systematically and efficiently train one’s language reflexes to jumpstart the language learning process.”

Lipschitz’ school in Spain continues to be utilised as a testing ground to perfect the techniques and materials. Young pupils begin to learn English as a foreign language here. The first step at school is training of language reflexes in the computer room. Each pupil uses a computer with educational software which produces the sound of single words (for example “nose”). The beginners have to assign this sound to an image of each word on the screen. They repeat this action a few times, listen to the sounds and are motivated to speak out the words loud.

After training, the learners move to step two into the schools’ focus room for continuing practice exercises with the teacher. Jonathan Lipschitz did this with the OEB audience by naming terms of various body parts in Spanish and asking the visitors to touch these parts. The exercise caused some fun among the participants. The third and final step of the Reflex Training at Jonathan Lipschitz’ school leads the young learners into the school’s interaction room. There is no teaching. The teacher is just there to facilitate natural, context-rich opportunities for the young students to sing, dance, play games, perform theatre and speak, for real language acquisition and communication to take place.