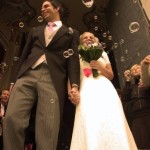 In the first part of the interview Hannah and Ale gave us a detailed look into the beginning of their relationship and the first steps toward their wedding. In the following second part of the interview both of them are going to explain which problems they had to manage and how different cultures can have an influence on the everyday life.

Were there any administrative hurdles? Did you have any problems with officials of the government, church, or anyone else?

There were quite a lot of hurdles to get married. It all started with the fact that neither one of us was Spanish, so we had to get our birth certificates and certification of baptism from Venezuela and Germany and have them translated and certified. Not only did this take time, it also cost us a lot of money.

Besides the paperwork, we were also required to be interviewed by the archbishop of Valencia in front of two witnesses, and we had to swear on the Holy Bible that we would raise any possible kids resulting from this marriage as Catholics.

In retrospect, was the organisation of your wedding a big struggle?

No, it was actually the most chilled wedding I could have imagined. Because we didn’t have a lot of choices or money, we kept it simple and had the people give it the flavour!

What about your surnames? Why they are different?

According to Venezuelan law, after marriage, the woman takes on the first surname of the man with the preposition “de”, so I went from Hannah Dröge to Hannah Dröge de Carrizo. Ale’s name didn’t change. We decided for this option because I liked being linked to my husband, but I wanted to keep the name I’ve had all my life. And I did not like the idea of a hyphen in my name.

Is there any particular German or Venezuelan way you do things in your relationship? If so, could you please give us an example?

Our food is a nice mix of cultures. Sunday morning we eat American-style pancakes because Ale grew up in the US. We eat a lot of bratwurst with mustard, and at least once a week, we make Arepas, a Venezuelan dish.

We speak mostly English. Back in 2002 when we first met, I did not speak Spanish, and Ale didn’t know any German yet. And somehow we never changed OUR language, although both of us speak all three languages now.

What about your daughter? In which language(s) do you talk to her and do you actively try to teach her your respective native languages – or any other languages?

Well, our little Teo is being raised in all three languages. Ale speaks Spanish to her, I speak German, and when we are all together we speak English. But it happens that we mix up the languages, and I might say something in Spanish and Ale in German. I think it won’t be a problem. Kids are like sponges, and in the end, she will at least have a feeling for all three languages, even if she decides to speak only one or two of them actively.