Is French really the Language of the Future? 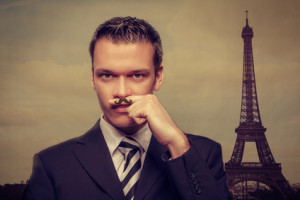 According to a study by the investment bank Natixis, French will become “the world’s most spoken language” by 2050. Given the doom and gloom typically accompanying stories about France’s waning influence in the world, it’s no surprise that this bit of counter-intuitive fortune telling has proved tantalizing to journalists.

“The [French] language is growing fast, and growing in the fastest-growing areas of the world, particularly sub-Saharan Africa,” Pascal-Emmanuel Gobry reports in Forbes magazine. Similar rehashing of the study’s results appeared in USA Today and the Boston Globe.

The problem is that French is currently ranked sixth among world languages, after Mandarin Chinese, English, Spanish, Hindi and Arabic. Could it really usurp English and Arabic in the African countries where it is listed as an official language in just 36 years?

Pas probable, according to experts.

“In reality English will remain the most used language in the world by 2050,” says Alexandre Wolff from the Observatory of the French Language. “This [study] concerns 32 states where French is the official language and here the projections are indeed impressive, but they do not take into account the coexistence of languages, which is the reality in many countries,” he says.

Indeed, many African countries are switching to English, even as they retain French as an official language. In Rwanda, for example, claims of French complicity in the Rwandan genocide have sparked outrage and led the Rwandan government to overhaul their education system, shifting away from French.

Even in countries that aren’t experiencing anti-French sentiment, the desire to compete in the global economy has led to the adoption of English as a lingua franca.

“An English derivative is the majority language of Sierra Leone, and remains an important language in South Africa, of course, as well as Nigeria, and various other smaller countries,” writes Gary Girod in New Geography. It makes sense from an economic standpoint: research shows a direct correlation between English skills and a country’s economic performance.

It must also be mentioned that Africa’s economic powerhouse, Nigeria, where the population is expected to swell to more than 440 million people by 2050, is a former British Colony where the official language is (you guessed it) English.

Given all this, it seems unlikely that French will ever be able to out-populate English or Chinese. While the language could become increasingly important in the years to come, especially in Africa, it will have to contend with a global economy where it has been sidelined it in favor of anglicisation.

Further complicating any fortune-telling are the sociopolitical relationships between African countries and the French language. Each country’s history with colonialism and current diplomatic relationship to France must be evaluated before any kind of prediction is made. This kind of analysis doesn’t lend itself well to quick statistics and flashy headlines, but it may provide a more accurate picture of the future of French in Africa and beyond.